Life with a one year old 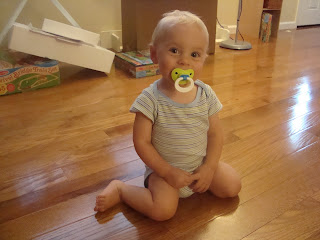 Titus' first birthday was actually on Sunday, so I am a little late on the birthday front, but he is one year old nonetheless :) And I am loving it. He is such a fun, happy boy. He is on the verge of walking (almost!) and he can crawl and pull himself up on things to get pretty much anywhere he wants to go. It is making things a little more difficult for me, but I think it is a pretty good tradeoff :)

He did his first real sign last night!  George and I have been working on several different signs with him. We haven't been very consistent with it, and he hasn't showed much interest or comprehension, but last night we decided to really push the sign for "more". We did it, then formed his hands to make the sign a couple times before we gave him more food. Eventually he did the sign on his own, after being prompted. He did it a few more times that night, and he did the sign today at lunch, so my mom and sister saw it. I wish I had a picture of him signing, but I just didn't think of it : (  It is so fun to see him signing! Even if he doesn't fully understand it enough to really communicate with us just yet, it makes him seem like even more of a little human being :)
Posted by Jennifer at 1:33 PM

Email ThisBlogThis!Share to TwitterShare to FacebookShare to Pinterest
Labels: Family