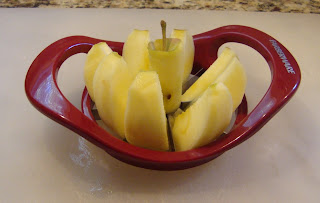 First, I made applesauce in the crockpot. I peeled and cored the apples and chopped them into eighths. Then I filled the crockpot with the apple pieces and added 1/2 cup apple cider (you can use water instead) and about a teaspoon of cinnamon.  I also added about 2 TBSP of sugar at the end, but you should taste the applesauce and sweeten to your liking because sweetness varies so much among different apples. I let that cook on low for a few hours, then I switched it to high so that it would cook faster. When the apples were soft I pureed the cooked apples in a blender. I didn't like the consistency of the resulting applesauce, it tasted too much like baby food in my opinion, so next time I am going to use an applesauce mill (I just have the old fashioned one that looks like this ).

I was only able to make a little over a quart of applesauce using the apples that fit into the crockpot, so I am going to make some more applesauce with my stockpot, so I can make a larger batch. 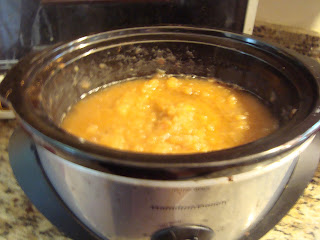 Then I peeled and sliced apples for apple pie filling. 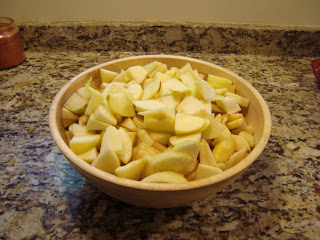 Bring to a boil and let it cook for 3-5 minutes, until it is thickened.

Add 18 cups of sliced apples and let it cook for 5 minutes more. 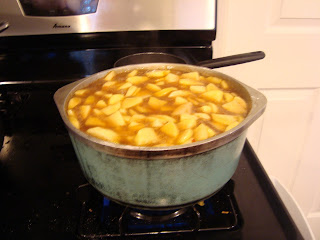 Next, I poured the apple pie filling into clean quart jars and processed in a hot water bath for 25 minutes. 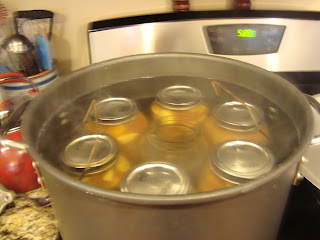 The recipe made 5 quarts of apple pie filling (plus I made 1 quart of applesauce). 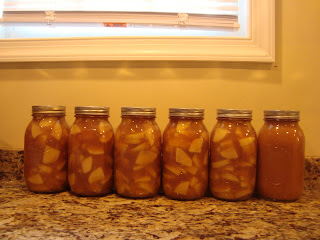 This was my finished product. I am excited to be able to make apple pies anytime I want to with relatively little preparation. And it is nice to have applesauce on hand as well :)
Posted by Jennifer at 9:32 AM

Email ThisBlogThis!Share to TwitterShare to FacebookShare to Pinterest
Labels: Recipes