Today is part two of the cloth diapering series I am doing. Part one is here. I will be explaining how I make cloth diapers work for our family, and hopefully if you are reading this you will be able to glean some information that will be helpful in your decision-making process. 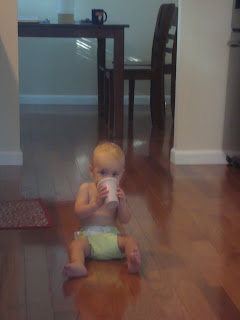 I have a 15-month-old son, and I have been using cloth diapers since he was 3 months old. The main reason I didn't use them before that was because his little legs were too small for the one-size diapers (he was only 4 lb. 4oz. when he was born). Now that I am more comfortable with cloth, I want to start cloth diapering earlier with the next one, using prefolds and covers. The prefold system is a lot more intimidating to me, but it has the advantage of fitting even tiny newborns.

I have learned a lot by trial and error, and I want to share what I have learned, in the hopes that other people might be able to use some of the same methods that I use.

I currently have 24 one-size pocket diapers. I have had as few as 12 diapers in my rotation, and I got by, but I really had to stay on top of the laundry, and a lot of times I resorted to disposables because I didn't have any clean diapers. With 24 diapers I wash 2-3 times a week, which is usually when the diaper pail is full, and I don't have to worry about running out of diapers. 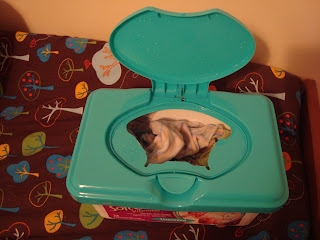 I also use cloth wipes. To me it just makes sense, I can just throw the wipes in with the diapers and wash everything together. Before Titus was born I sewed some flannel wipes, thinking flannel would be nice and soft, but flannel is actually a little rough once it is wet, and it is not very good at removing solids. Next I tried pieces of fleece, but fleece repels water, so that didn't work very well as wipes. Finally, I decided to try some washcloths I had gotten as a shower gift, and they were perfect! The terrycloth has some texture to help dislodge sticky poop, and they are easy to maneuver, and very soft. The key is to get the very thin, inexpensive ones. I bought a pack of 10 from Kmart for $4.50. Here is an example of washcloths that look like the right kind.
I  keep them in an old wipes container, and I put them in while they are still damp from the wash. I add a little bit more water so they are nice and wet, and I keep a little bottle of baby shampoo at the changing table and put a drop of that on a wipe to get Titus nice and clean if he has pooped. I would recommend having at least a dozen cloth wipes. 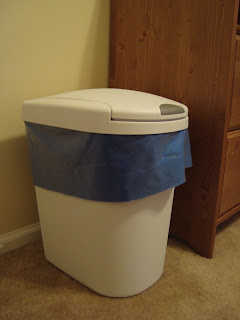 My diaper pail is a trashcan with a lid that I got at Target. I made 2 liners for it out of PUL, so I can just pull out the liner and wash it with the diapers. That way I don't have to wash out the diaper pail as often. To make each diaper pail liner I took a yard of PUL, and folded it in half widthwise so it was 36" X 21". Then I sewed a french seam around the bottom and side, to create a bag. 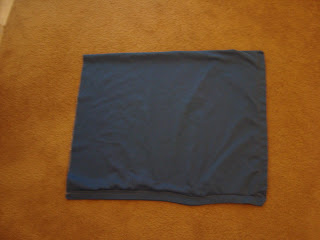 Here is the outside, which faces the diaper pail 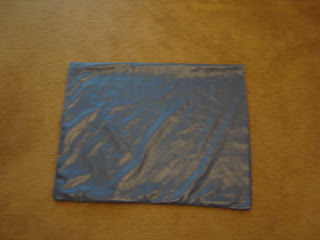 And this is the shiny, waterproof inside part, which faces the dirty diapers 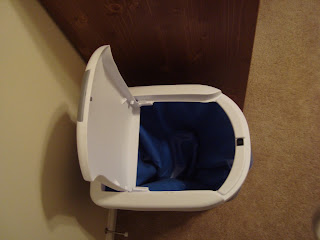 Here is the liner in action! If you aren't into sewing BumGenius makes diaper pail liners that cost about $20 each. My homemade liners don't look as neat & professional, but they only cost about $5 each.

Diaper changes are usually pretty painless. Take off the diaper, pull out the liner, dump both in the diaper pail. However, if there is poop involved it becomes a little more interesting. Newborn, breastfed poop is just fine to go in the wash, I never had problems with it washing out. But once the baby starts solid foods if you don't rinse all the poop off into the toilet you will find partially digested food and other questionable things in your washing machine (gross!). You can hold the clean part of the diaper and swish it around in the toilet to dislodge the poop, but I found that to be messy and not always very effective.

A friend generously gave us her diaper sprayer, and I love it so much! It "power washes" the poop off the diaper, and is quick and efficient. The only downside that I can see to the diaper sprayer is that the spray doesn't always stay in the toilet, so it can be a little messy. That really doesn't bother me, I just wipe it up with toilet paper, but I thought it was worth mentioning. 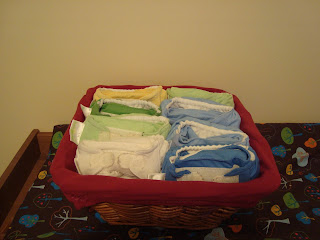 If I have the time, and I think about it, I stuff the clean diapers and store them in this basket, which I keep under the changing table. They look so nice and are very convenient. 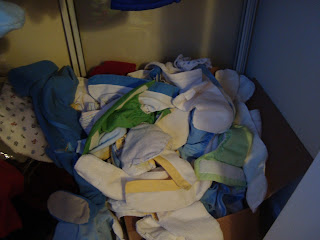 Most of the time I just dump the diapers and liners out into Titus' closet and shut the doors and walk away.